You are here: Home>Exhibition>Designing the Stained Glass - Part II 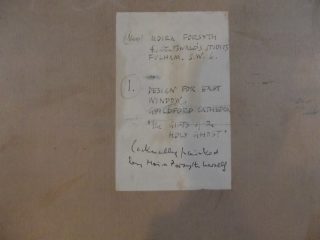 The uniqueness of Guildford Cathedral archives is the fact that we have so many items right from the very beginning of the building of the Cathedral.

Within the Archive we have a beautiful framed piece of art which depicts the Rose Window which is over the High Altar in the Cathedral.  Because it is small and so high up, often visitors do not notice its full beauty.

This piece of work is a coloured drawing depicting the beauty of the Rose Window.  The design incorporated the Gifts of the Holy Spirit and allows you to get up close and personal to the design, which you would be unable to see in such detail within the Cathedral building itself.

The piece was drawn by the designer of the window – Moira Forsyth.

he window was the first major piece of work completed by Moira Forsyth and she was commissioned to undertake it by the architect Sir Edward Maufe in 1939.  Moira Forsyth wrote about the design of the Window in more detail in 1945 saying:

The East Window is a Rose Window.  Within its circular frame the stone mullions form a voided cross dividing the glass spaces into nine – a circular panel and eight smaller surrounding panels … the window will be rich in effect, but subtle in colour.  The ground is shimmering blue, the background of the lettering sharp green; but the other colours are soft wines, moss greens, golds, relieved with silvery white and touches of stronger colour in the wings … a window has many moods changing with the time of day and the light it needs to bring out the colour and the life of the glass … a window … should be a work of devotion, glorifying God in its intention and should, in giving pictorial form to some theological truth, express in its own language the teachings of the Church

The making of the Rose Window in itself was done under tremendous difficulties during the Second World War.  Moira herself spoke about her experiences:

The first window of any importance I was commissioned to make was the East (Rose) Window for Guildford Cathedral of which only the Crypt had been built at the time … the window was made under extreme difficulties.  The first bombs on London damaged our glass studio (Lettice Street) and I had to restore what I could of the cartoon and complete the glass sections, which were stored in the crypt.  Only when the Cathedral was completed did I realise how high the window was in the structure and looked comparatively small … but as the glass was all Norman slab (alas no longer available) it does radiate enough colour to make it intelligible

With thanks to Adrian Esdaile for his research into the Stained Glass Windows of Guildford Cathedral.